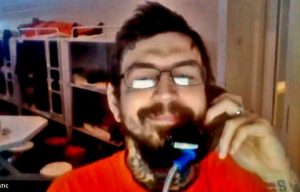 Eric, who just had his 33rd birthday, recently suffered a stroke. He’s been at 9 facilities in the last year. He has visible anti-fascist tattoo’s and because of this and his anarchism and outspoken perspectives, he has been pitted against antagonistic correctional officers and nazi gang members and force to fight for survival. Eric frequently loses his commissary funds when he is moved. He hasn’t read a book in 6 months because he hasn’t been allowed any.

For the hour of our broadcast, Eric talks about his health, his political stance, dealing with nazi’s on the inside, his views on the anti-fascist struggle on the outside, the loss of Tom Manning and supporting political prisoners, counter-recruiting nazi’s and other topics. You can find his writings, art, and updates on his situation at SupportEricKing.org. The message that we are building off of can be found archived in video form here.

The other main voice you’ll hear is that of Eric’s partner, who’s a member of his support committee. What you’ll hear in the radio broadcast is only a tiny, iceberg tip, of this person’s words, what we could fit in an hour. If you’d like to hear more of what they have to say check out the podcast. We speak about changes in the Federal Bureau of Prisons system, specific things that BOP prisoners and their families and supporters have to deal with, the culture of shortcomings in how people engage family and loved ones of prisoners, increasing use of communication management units (also known as CMU’s) and in particular Administrative US Penitentiary Thomson, in Thomson, IL, which is used as a holding facility where prisoners awaiting CMU status decisions basically sit meanwhile in CMU status while they wait. This marks a continued growing in the logic of incarceration in our civilization towards more isolation, new sweetheart prison building contracts, more contol, more beds to fill, more punishment of what might be mental health distress and trauma responses among prisoners. The guest speaks about the potential impact on ICE detainees who are speculated to be put in this facility.

As Eric gets transferred from county facility to county facility of Federal overflow, his commissary doesn’t move with him. So, his support committee is handling purchases of communication access, medical funds, moneys for buying vegan foods and supplements and other needs on his behalf. A new fundraiser has gone up and can be found at: . Please consider donating.

Eric just got moved before this broadcast. As he moves around and things change, info on his case can be found at SupportEricKing.org. You can write him, for the time being, at:

The books that Eric mentions being excited to read are:

This entry was posted in General and tagged anarchist prisoners, Eric King. Bookmark the permalink.